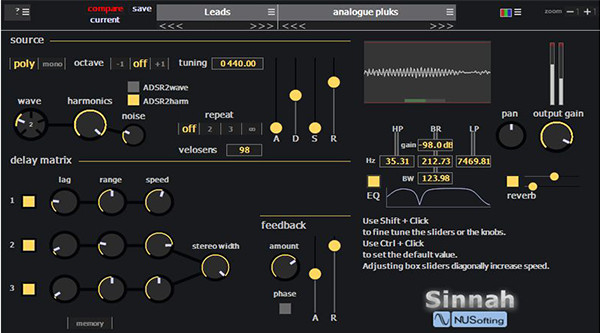 Sinnah is a synth based on a single complex oscillator that includes five waveshapes with increasing spectral complexity, harmonics level for all waveshapes, noise level, and a delay matrix.

The delay matrix can have various configurations, from a "triple chorus" per voice to highly randomized resonators, or tuned relatively to the note played.

The delay matrix can also do multiple slapback echoes. The feedback control of the matrix can go from zero to extremely saturated and it's modulated by its own envelope. The output of each voice is stereo via the delay matrix, which features a stereo spread knob. The main analogue modelled ADSR envelope is loopable: two, three or continuous repeats.

The envelope can modulate the waveshape selection and the harmonics level.

The synth also features a subtractive stereo filter to carve the spectrum of the sound, somehow like an equalizer, with three filters: high pass, low pass and band reject (notch).

The band reject filter also features gain and bandwidth controls. Moreover a useful simple reverb is included. The oscillator is antialiased and can play eight voices or mono, and features octave and fine pitch controls.

The GUI is fully drawn by vectors and resizeable, featuring an oscilloscope and peak meters. And eight colour schemes are available to fit your mood and taste.

An extended ToolTip display provides information for each control at mouseover. So you don't need to read a lengthy manual to learn what a knob or a slider is for.

The preset system is crossplatform, the files use the YAML format so they are very easy to read and edit if needed. Moreover, the preset names can support the complete international character set. Sinnah is a VA synth plugin, but instead of the standard subtractive resonant filter it uses a resonant delay network.

Hard to describe its sound by words, despite the few controls the array of possible sounds is wide and wild.